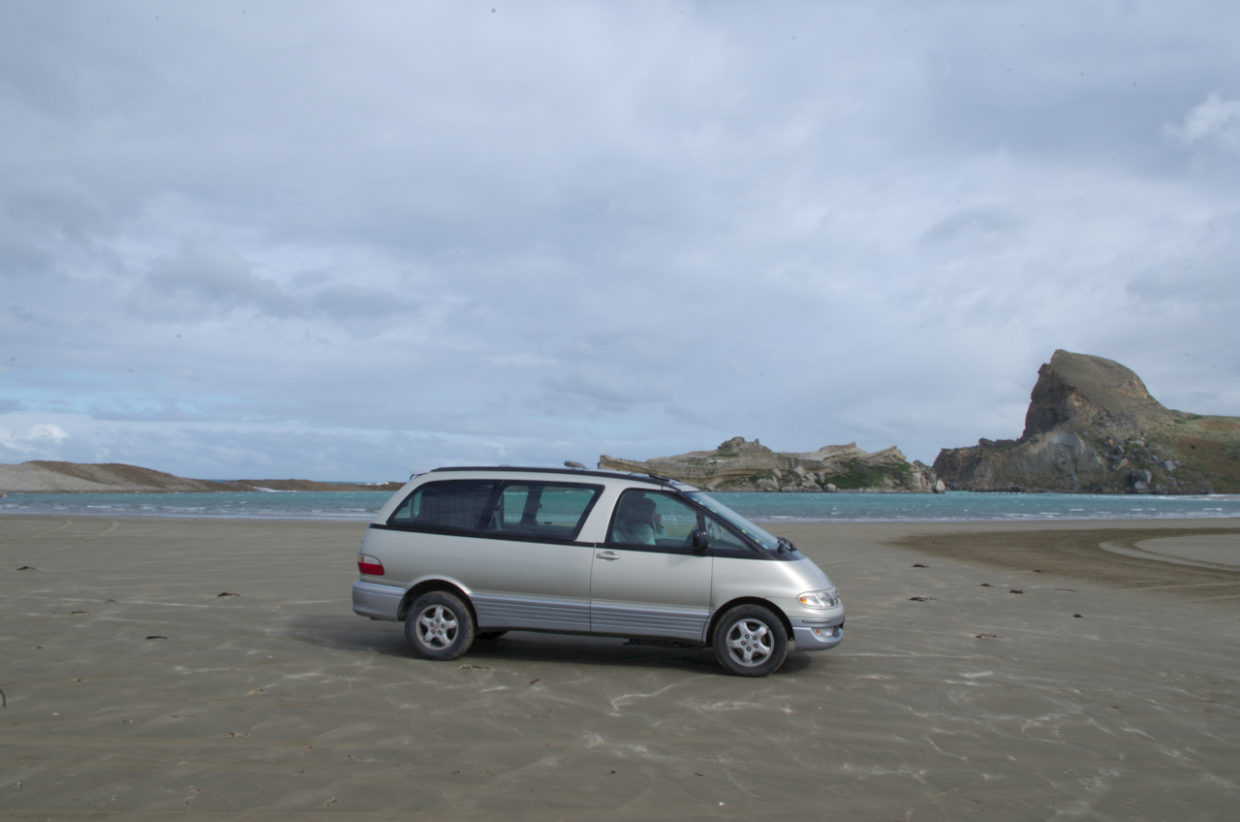 The first few weeks in New Zealand were a whirlwind of setting up phones, buying a van, and road tripping down the North Island (which you can read about here). This past week has been a nice change of pace, because we’ve been able to get settled at the house that we’re sitting.

Also, because of the generosity of the people we’re house sitting for, I’ve had a few basic tools at my disposal. Thus, I started working on sprucing up our campervan.

When we bought Gimli (our van), there was a makeshift bed in the back which served us well on our road trip down from Auckland. However, the bed was too low to fit our bags underneath, and I wanted to find a way to have more space in the back when we weren’t actually sleeping. Enter the campervan extendable bed.

As you can hopefully see from the pictures above, the goal was to make a bed which has extending slats. This allows the bed to fold up to about half the size during the day and then extend at night.

First, I measured the interior of the van and determined that I wanted the bed to be 190cm x 120cm when the bed was fully extended. This was about as wide as I could go in the van, and short enough to allow for a cabinet to be built in the back of the van.

I decided that since there would be quite a bit of overlap even when the bed was fully extended, I would make the initial frame 190×70 and then the extension would add another 50cm of width.

I knew the initial frame was going to be 190cm x 70cm. This also meant that each slat was going to be 70 cm long. In order to build the frame, I simply screwed the 4 sides onto 4 legs at each of the corners.

Side note: in the end, I added a leg in the middle of each long side so that we would have more support.

Step 3 – Fix Every Other Slat

Once I had built the initial frame, I lined up all of my slats on top of the frame. I only wanted about 1cm between each slat, because we have a thin mattress and don’t want to feel each individual slat underneath us.

With all of the slats lined up, I fixed every other slat onto the main frame with a single screw on each side.

The next step is to build the extending arm of the bed. This arm is essentially the exact same as one of the long sides of the original frame.

This is the tricky part. Up until now, we’ve basically just built an Ikea bench. It may be trendy and wooden, but it’s nothing to write home about.

The key to attaching the extending arm is to have someone help you hold everything. Essentially, every slat that is not connected to the main frame (which should be 1 less than half of them) will connect to the extending arm on one side and to a sliding bar on the other side. This sliding bar, is identical to the long sides of the main frame and simply stops the un-fixed slats from popping out of the bed.

This final step was made up on the fly. Initially, I thought I would be done after step 5. I realized once I got done with step 5 that the bed was fine when it was extended, but the “sliding bar” would fall down when the bed was in bench form. Essentially, I needed a way to hold the “sliding bar” up next to the fixed slats, even when it was in bench form.

Side note: make sure you don’t screw the tracks too tight, because the sliding board still needs to be able to slide.

There you have it. That’s how I built my camper van extendable bed. If you’ve got any thoughts or ideas on how to improve this design, I’d love to hear about them in the comments section. Also, as always, if you dig Yonderstoke and want to follow along on our adventures, please subscribe to our email list.

If you want to see the next part of our campervan build, click here.