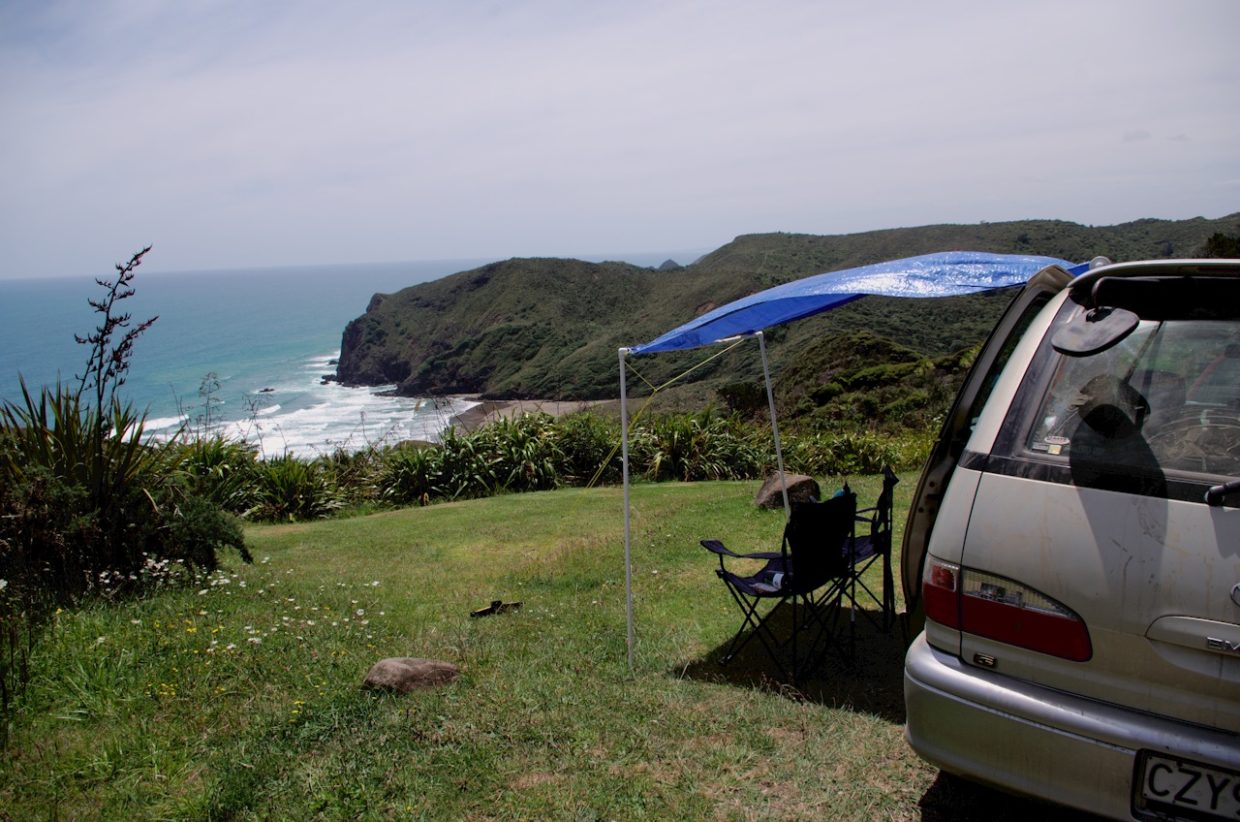 New Zealand is an amazing country! And our little campervan, Gimli, has served us quite well as we travel and explore this beautiful place. However, New Zealand is green for a reason. It rains quite a bit here! After a few nights of being cooped up inside our van, it was clear that we needed an awning.

After doing a brief search on TradeMe, I quickly realised that a legitimate, professional awning was out of the question. The cheapest used awning I could find was over $500! Thus, I decided it was time to try to build a basic DIY campervan awning. Obviously, this is a makeshift awning that cannot stand up to torrential downpours or gale force winds, but it works great for the light drizzles that are so common in New Zealand.

There are a few basic requirements I had for this DIY campervan awning. First, it has to be cheap. Not only are we poor, but if the awning is expensive we might as well have just bought a professionally built awning.

Second, the awning needs to shed light rain and also be UV resistant. The main reason for wanting this awning was to have some shelter from the light drizzle that is so common in NZ.

The overall plan for this awning was to put a small PVC pipe inside of a larger PVC pipe with a slit. The tarp would roll up by wrapping around the smaller PVC pipe.

The first step was to cut the slit in the large PVC Pipe. I’m sure there is a more professional way to do this, but I used a handheld grinder. My cut wasn’t perfect, but it did the job.

Next, I drilled holes in the back of the pipe at the spots where I wanted to attach the awning to the roof racks of our van. This part will depend a lot on your specific type of vehicle, but for a 1998 Toyota Estima I used 6mm and 8mm bolts to screw into the roof rack mounting points.

I used a step bit to drill 20mm holes in the 65mm End Caps. This allowed the smaller 15mm pipe to fit snugly through and rotate easily.

At first I simply glued the elbow onto the end of the 15mm pipe. However, I realised that the constant twisting of the crank would likely weaken the glue. Thus, I also attached two rivets to hold the elbow firmly in place.

This was by far the trickiest step! It was very difficult to align the washers, rivets, and holes because of the narrow slot that I was working with. However, after a lot of wiggling and frustration, I finally got the tarp riveted to the inner 15mm pipe.

This step was very simple. Glue elbows to each end of the 15mm pipe that will be the outer horizontal pipe. Next, glue an end cap to one end of each of the pipes that will serve as legs.

Step 8 – Attach the tarp to the Outer 15mm Pipe

In order to attach the tarp to the outer 15mm Pipe, I just used zip ties. There are lots of options that would work here: zip ties, rivets, cord, etc.

The final step to make sure the awning actually stands up is to attach some sort of cord or rope to the outer horizontal pipe. This rope then needs to go to a stake or a weight to hold the awning tight and keep it upright. Without this rope for tension, the awning is bound to fall over.

Well, there you have it. This was my first stab at making a DIY Campervan Awning, and there are certainly a few things I would do differently next time.

If you’ve had success making a DIY campervan awning, please post tips and tricks in the comments below. I am always looking for new projects, and eventually I’m sure I’ll want to improve on this design.