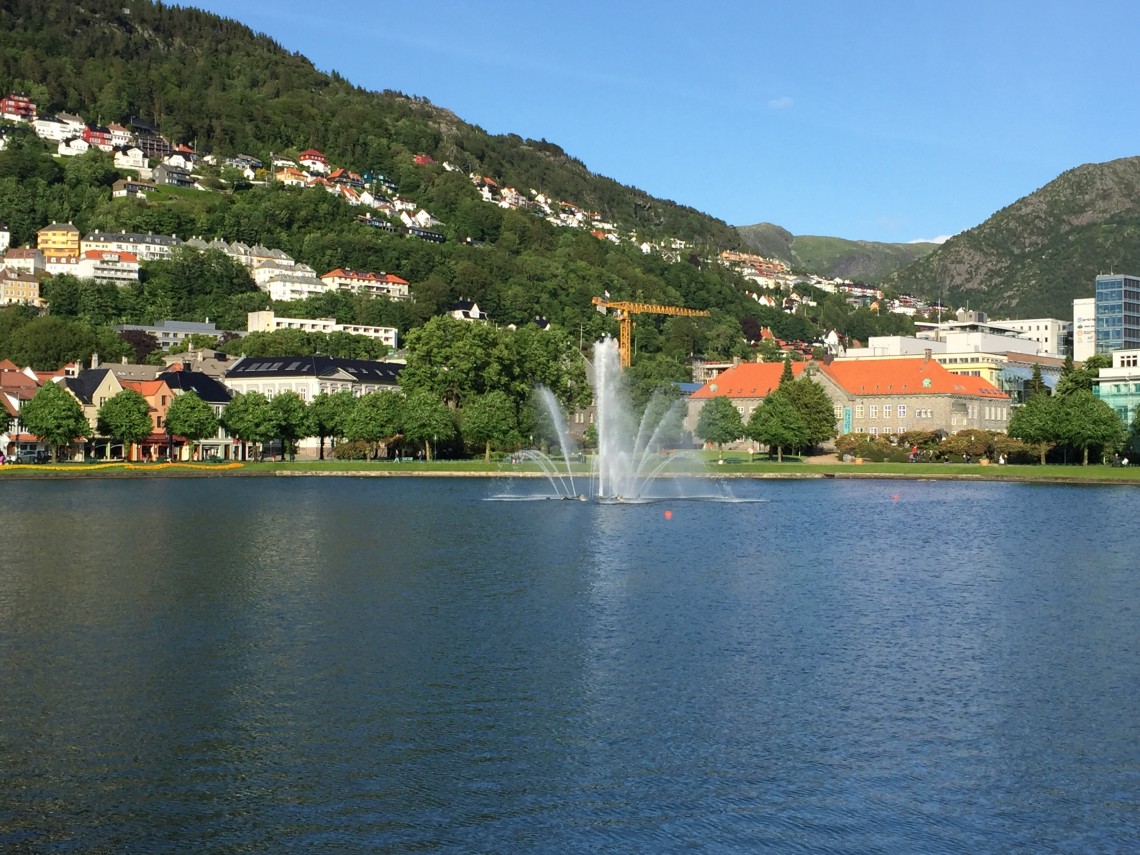 10 Tips for Traveling to Norway on a Budget

If you’re anything like the rest of the human race, chances are your instagram feed is flooded with breathtaking pictures of mountains, oceans, forests, and basically the most beautiful places the Earth has to offer. And, if you’re like me, you probably see these incredible pictures and have no idea where they come from.

Well, when in doubt, the pictures are probably from Norway. Seriously, the country is unreal. If you go there in the summer, it will basically blow anywhere else out of the water. I’m pretty confident that I could’ve been blindfolded, spinning around with my camera, and still taken better pictures there than I could at home in Southern California. The country is that picturesque.

What’s the catch? Norway is EXPENSIVE!!! Like $30-for-a-medium-pizza expensive!

My wife and I just got back from Norway for our 1-year anniversary trip, and through our travels we learned quite a few tips and tricks for experiencing all the beauty that Norway has to offer without breaking the bank. Below is our list of 10 tips for traveling to Norway on a budget.

1) Fly to Norway on Norwegian Air

Norwegian Air is a budget airline that has great prices to Norway from many major US cities. Not only is it really affordable, but they offer direct flights from LAX (and probably other cities in the US). They’ve also got great in-flight entertainment, decent food, and an all-around enjoyable flying experience. Here’s an example of the price difference: you could fly from LAX to Oslo in October for $600 round-trip on Norwegian. The next cheapest airline is Air New Zealand and it would not only take an extra 5-hours because of layovers, but it would cost almost $900. Many cities in Norway offer some sort of city pass. Oslo, for example, has the Oslo City Pass which is available at multiple prices depending on how long you want it for. This pass lets you visit more than 30 museums for free, gives you free travel on all public transport, lets you park in municipal car parks, and much more! If you like museums, this is definitely the way to go.

Let’s look at the 24-hour pass as an example. It’s NOK 320 which is roughly $39. Let’s say you want to visit the Viking Ship Museum, the Norwegian Folk Museum, and the Munch Museum. Plus, maybe you want to take a ferry out to the islands in the fjord or go swimming on one of Oslo’s many beaches.

Then you get free public transport (which includes buses, ferries, and trains) and many other discounts depending on what you want to do.

So basically, if you’re going to visit at least 3 museums, it’s definitely worth it! If not, then you’ll have to add up the costs and see if it’s worth it.

3) Sleeper cars are where it’s at Norway is a pretty big country. And if you’re like us, you want to see as much of it as possible during your vacation. One of the best ways to do this is to sleep while you travel! Sleeper cars on Norwegian trains are super comfortable, pretty affordable (especially considering hotels are pretty darn expensive), and you get to feel super classy, like James Bond, getting your own compartment.

My wife and I took the sleeper car from Oslo to Bergen which was pretty much perfect. The train left at 11:00pm from Oslo and arrived in Bergen at 7:00am the next morning. We got a solid 8-hours of sleep in surprisingly comfy beds, and we didn’t have to lose one of our precious days on travel. It was only $100 extra for us to get the sleeper car (compared to normal seats) and since that is basically the price of a hotel that part was a wash.

One thing that’s important to note: Norway has by far the most scenic train and bus routes that I’ve ever seen. So even though you aren’t using one of your days traveling, you are going to miss out on some incredible scenery if you go to sleep. My wife and I compromised on this and took the sleeper car at night from Oslo to Bergen and then had normal seats during the day on our way back.

4) If you want to take the road less traveled, it’s best to rent a car

It’s pretty hard to get around Norway, and that’s not because of the public transportation. Norway has some of the best public transportation I’ve ever experienced. The problem is that when a country is mainly composed of steep mountains, deep fjords, and pretty much everything in between, it makes getting anywhere (unless it’s by boat) pretty tough. We were still able to do everything we wanted to do, but we had to get pretty creative with bus/train routes and getting on and off ferries etc. For example, we wanted to go on a hike to Trolltunga (Troll’s tongue). It’s an incredible vista of a rock that juts out thousands of feet above a fjord below. However, this hike is not near any major cities. The closest town is a little village called Odda. In order to do this hike, we had to book a separate hotel in Odda, catch the earliest bus to Trolltunga (7:00am), and then catch the lastest bus back to Odda (8:00pm). It would’ve been much easier with a car because we could have started earlier or ended later depending on our own schedule.

5) Stay in the cheapest hotels you can find. They’re super nice by American standards! In each city, we pretty much booked the cheapest hotels we could find (granted that still averaged about $100/night). However, we were really surprised when we got to these “cheap” hotels and found out that they were super nice! The picture above is the view from our hotel room at the Hardanger Hotel in Odda. Basically, we didn’t see a sketchy place in the entire country. It was nuts!

6) Get your money’s worth at your hotel’s free breakfast!

The food in Norway is so expensive! There’s really no way to get around that. Unless you’re staying someplace with a kitchen, you’re probably going to be eating out a lot. And that can really drain your wallet. However, most hotels come with really good breakfasts. They often have eggs, bacon, waffles, fruit, juice etc. So get your money’s worth and eat a hearty breakfast! It’s the most important meal of the day right?

Also, many of the free breakfasts offered bread, meat and cheese. They even usually had wax paper sitting right next to the sandwich supplies. It’s like they were encouraging us to pack a sandwich for the road. So we did. We probably had free hotel sandwiches for half of our lunches, and probably saved $100 right there.

Normally my wife and I try to avoid guided tours and mobs of photo-snapping tourists like the plague. We hate having to adhere to a preset schedule, and like the flexibility to do our own thing. Plus, we want to feel like we’re getting a true taste of a country’s culture and typically guided tours don’t have that vibe.

Norway in a Nutshell started out as everything we hated. We were herded onto a train filled with noisy tourists. Then we were shuffled into buses, again mobs of tourists. But then it changed.

First of all, the bus ride is the single most beautiful bus ride this side of heaven! It was incredible! Waterfalls, mountains, fjords, forests…so cool.

Then we got onto the ferry and got to explore the fjords even further. It was captivating! Huge mountains rose out of the water on either side of us, and the water was so calm it was basically a mirror. There were waterfalls falling thousands of feet into the fjord, kayakers cruising through the blue-green water of the fjord, and quaint little fishing villages around each bend.

Finally, there’s the Flam railway. This old cog railroad is truly an old-world engineering marvel. It climbs into the mountains at a very steep angle giving you breathtaking views of the valley below. The train even stops at a massive waterfall so everyone can get a great photo-op.

All-in-all, the Norway in a Nutshell trip from Bergen was probably the most beautiful half-day of my life. The various terrains that you get to experience, coupled with Norway’s astounding natural beauty is truly incredible. While there are some drawbacks to this trip (namely the crowds and the set schedule), I think it is the best way to experience the many different types of natural beauty that Norway has to offer, especially if you don’t have multiple weeks to explore all that Norway has to offer.

Before we left for Norway, we went to Target and bought a few boxes of Cliff Bars and some other snacks. We were so thankful that we did. The Cliff Bars, in particular were a life-saver on some of our long hikes and excursions.

If you’ve got room in your luggage, I would highly recommend packing snacks so that you don’t have to buy more expensive snacks in Norway. Plus, once you eat your snacks, that’ll give you room for souvenirs when you head home.

9) Do as many free activities as you can.

There are tons of free activities you can do in Norway. Below I’ve listed some of our favorites.

Many places in Europe have a VAT or Value-Added Tax. You pay this tax when you initially purchase most items, but then you can get it back, as long as you have the receipt, at the airport. There’s a little kiosk in the Duty-Free section of most European airports where you can process your refund. Just remember to ask for your Tax-Free receipt when you’re purchasing souvenirs. It’s definitely worth it, because the VAT in Norway is 25%!!!